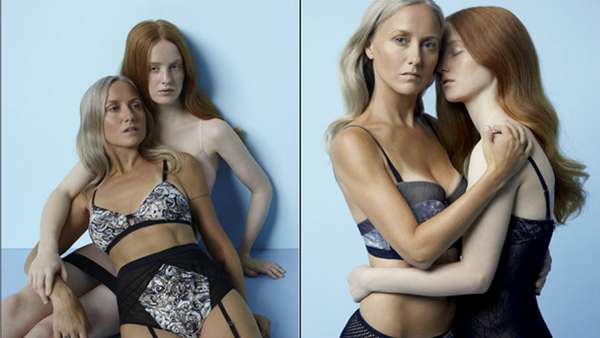 Katherinev123 — November 17, 2011 — Naughty
References: foxnews & lingerietalk
Share on Facebook Share on Twitter Share on LinkedIn Share on Pinterest
Lingerie brand The Lake and Stars recently released an ad campaign featuring a mother and her 19-year-old daughter dressed in lacy lingerie and posing intimately with one another. The ad has come under fire by many media outlets and consumers who question the brand’s intentions, claiming that the ad is too provocative, inappropriate and “demeaning to women.”

In The Lake and Stars ad, the women are shown embracing and pressed against each other in a sexual nature. While some viewers are trying to understand the provocative nature of the ads, most people seem aggravated by what the brand has presented, condemning the brand for “incestuous and lesbian suggestions.”

Regardless of The Lake and Stars’ intentions, the label has certainly succeeded in getting attention—if that was it was looking for. As AdRants puts it, “This is yet another attempt by a fashion brand to ‘shock’ and ‘surprise.’”

What do you think?
5
Score
Popularity
Activity
Freshness
Get the 2021 Trend Report FREE