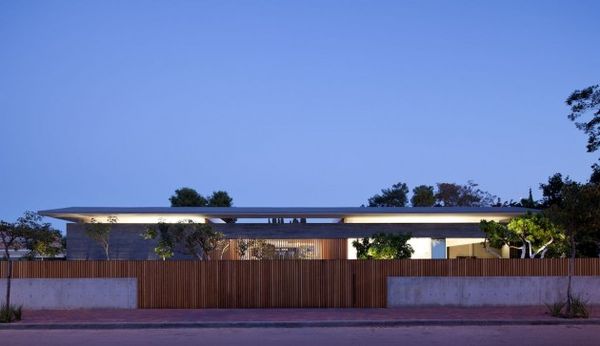 Jamie Danielle Munro — April 11, 2014 — Art & Design
References: pitsou & contemporist
Share on Facebook Share on Twitter Share on LinkedIn Share on Pinterest
Pitsou Kedem Architects designed The Float House, which has the illusion of being built on water. However, the designers did in fact base everything on solid ground, with a shallow pool in the front walkway that visitors have to walk through before entering the house (don't worry, there is an elevated walkway to avoid getting wet)!

The house is situated in Israel, and the architects wanted to ensure this one-storey abode exuded as much character as possible. The result is a stunning piece of architecture that features mostly glass windows, allowing a constant flow from the inside to the outside of the place. There is no real divide between the surrounding nature and where the structure begins, since the water makes this transition seamless, which was one of the goals of Pitsou Kedem Architects.
3.5
Score
Popularity
Activity
Freshness
Jeremy Gutsche Keynote Speaker