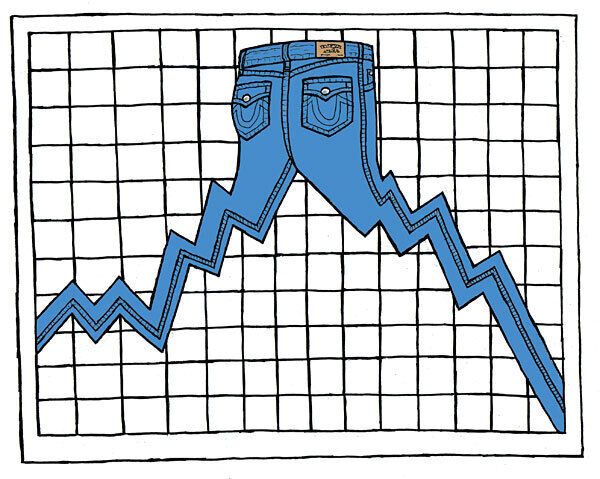 Eva Rubenov — July 12, 2006 — Fashion
References: slate
Share on Facebook Share on Twitter Share on LinkedIn Share on Pinterest
Is $300 a reasonable price to bay for faded and torn jeans? For the last few years, the fashion industry would suggest that the answer to that question is, 'YES'. However, many trend experts aren't so sure, predicting a pop in the $300 denim market. Like all good bubbles, the crash has been predicted for more than a year. Will it pop?

"Last summer, when spending $200 or more on a single pair of jeans still seemed crazy, the stock of a small company called True Religion traded at less than a dollar. But over the past year, as True Religion jeans started hugging the butts of celebritiesâ€”the company's Web site lists Jessica Simpson, Angelina Jolie, J. Lo, and the cast of Desperate Housewives as enthusiastsâ€”the rest of us began snapping up pairs. True Religion's stock soared to over $17. If you looked at sales growth without knowing anything else about the companyâ€”$22 million in the second quarter, a fivefold increase from a year earlierâ€”it would be easy to think that True Religion had come up with a cure for cancer instead of a more expensive pair of jeans.

Jeff and Kymberly Lubell, the husband-and-wife team who run True Religion and own more than 40 percent of the company's stock, should enjoy this while they can, because there is a denim bubble, and it looks like it's about to burst. The $110 million "premium denim" market is beset by signs of excess. Consider the $128 jeansâ€”for toddlers. Or the 400 percent markup: A pair that costs $60 to make retails for $300. Or the race to rush new brands into the stores: Seven for All Mankind, followed by Citizens of Humanity, followed by Stitch's :" - Slate.com
4.3
Score
Popularity
Activity
Freshness
View Innovation Webinars