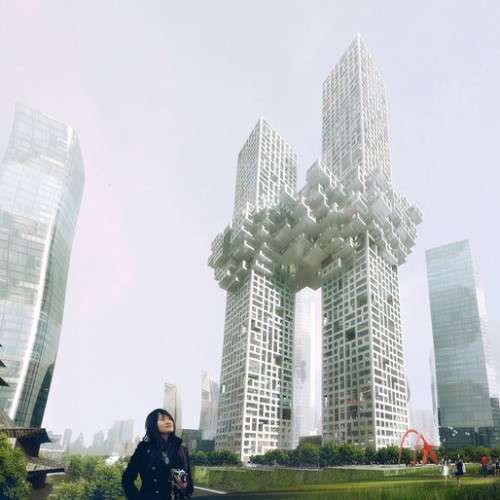 Meghan Young — December 13, 2011 — Art & Design
References: mvrdv.nl & fastcodesign
Share on Facebook Share on Twitter Share on LinkedIn Share on Pinterest
The Cloud by MVRDV may have an innocent enough name, but its design happens to hold a very different perspective. Although the bulging middle can be taken as pixelated clouds that creates an illusion that this building is taller than it actually is, those 'clouds' actually have a more sinister existence. The Cloud by MVRDV happens to resemble the Twin Towers in New York City, which were the target of a terrorist attack that this design seems to pay tribute to.

Although the Dutch architects insist that the resemblance is simply a coincidence, the controversial similarity cannot be denied. Thus, the Cloud by MVRDV has been getting a lot of attention in the last few days. Yet MVRDV wants to make clear that it was "designed based on parameters such as sunlight, outside spaces, living quality for inhabitants and the city."
4.5
Score
Popularity
Activity
Freshness
View Innovation Webinars