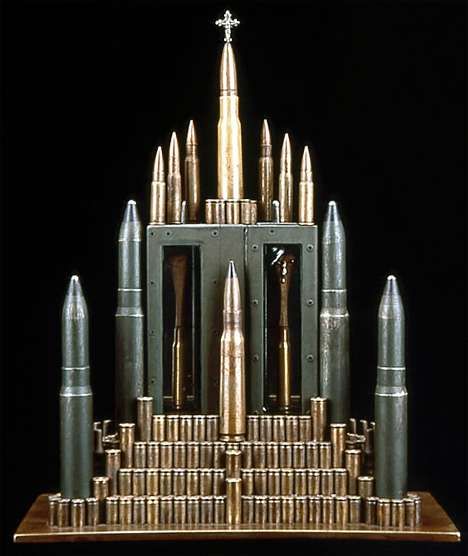 Masterpieces That Illustrate The Creative Art of War

The top secret technique of how he achieves his high speed bullet photography prove David Neff’s skill at capturing the speed of the bullet.

The furniture and sculpture came about when sculptor Sasha Constable decided to utilize 125,000 weapons discarded by the Cambodian government following thirty years of war.

The life size wax statues of Petroc Dragon Sesti, in collaboration with the British Army sought to show the damage canons can wrought on the human body.

Matt Stromberg, a professor at Savannah College of Art and Design, uses unusual tools for his art, including submachine guns, rocket fuel and explosives.

Though this would probably weight about a ton, Ross Rodriquez’s bulletproof vest sought to explore the themes of gun violence in urban America.

On display at the Detroit Zoo is Mary Engel’s creation about whom she says, “Elephants have become endangered due to the 'gold' of the elephant, its ivory tusks. The bullets which make this sculpture are beautiful but menacing, as they remind us of humans’ destruction of exotic creatures."

Interesting that two of the works are elephants.
4.5
Score
Popularity
Activity
Freshness
Get Better and Faster