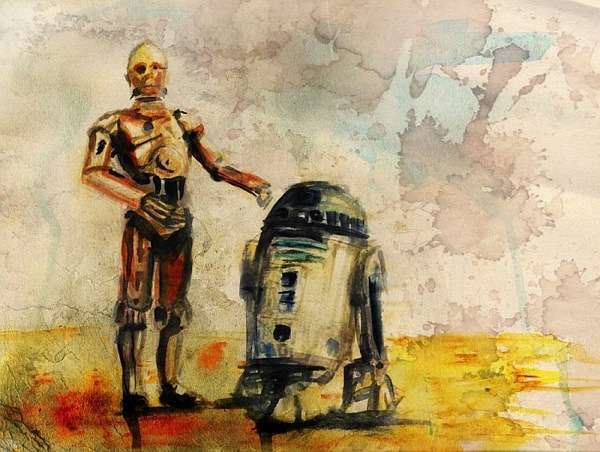 Jason Soy — May 25, 2012 — Pop Culture
References: terrycook.imgur & blog.thaeger
Share on Facebook Share on Twitter Share on LinkedIn Share on Pinterest
The epic universe of Star Wars continues to inspire on all fronts, and Terry Cook demonstrates that fact with his watercolor masterpieces. Rendering the likes of C-3PO, R2-D2, Boba Fett, Darth Vader, Yoda, Han Solo and more in his minimalist yet realistic style, Cook shows off his fine arts skills in traditional painting while depicting futuristic subjects from “a long time ago in a galaxy far, far away.”

Terry Cook’s finished products are almost impressionistic, with an emphasis of capturing the feel of the characters rather than illustrating with refinement in mind. He is thus able to depict Han Solo and C-3PO with seemingly quick strokes and plenty of shadows, forgoing details like the eyes or electronic mechanisms. The painterly overall aesthetic makes viewers equate these images to something more commonly associated with gallery pieces rather than Star Wars fan art.