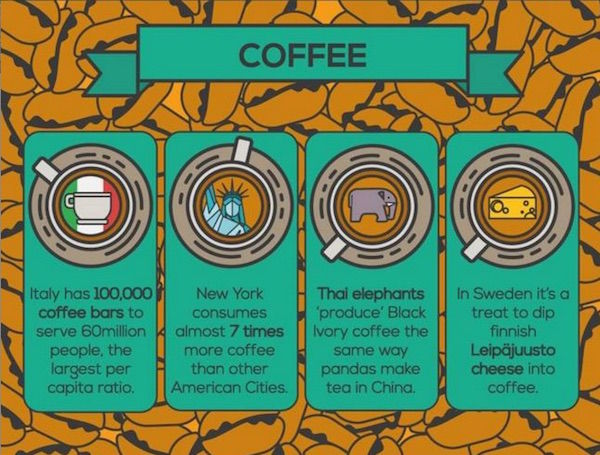 This Coffee and Tea Infographic Compares the Two Beverages Globally

Alyson Wyers — October 28, 2015 — Lifestyle
References: expressvending & designtaxi
Share on Facebook Share on Twitter Share on LinkedIn Share on Pinterest
This coffee and tea infographic compares the two popular caffeinated beverages and even lists the health benefits of both. Created by Express Vending, the char 'Boiling Point: Battle of the Beverages' contains facts and figures about the bean and the leaf.

The coffee and tea infographic covers the origins, world culture, industry facts, health information, cost and more. The world is divided almost evenly with coffee in the West and tea in the East, with Thailand and England being major exceptions. According to the chart, 50% of Britons drink their tea with biscuits. In America's southern states 85% of the tea consumed is iced. New Yorkers drink almost seven times more coffee than people in other states. In Italy there are over 100,000 coffee bars for 60 million people.
3.1
Score
Popularity
Activity
Freshness
Get Better and Faster