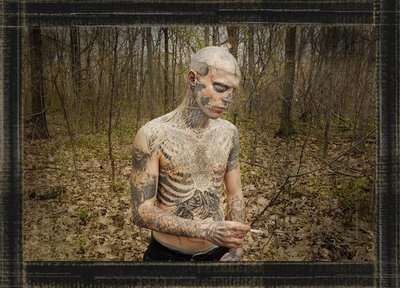 Gabriela Aizcorbe — July 8, 2008 — Unique
References: bizarremag & gabrielaaizcorbe.blogspot
Share on Facebook Share on Twitter Share on LinkedIn Share on Pinterest
Madness, art or a life choice. Those are some of the explanations I think of when I see pictures of Rick, a man who spent more than 24 hours having his body covered from head to toe in a zombie tattoo.

For Rick, his tattoos are a work of art and his decision to become a â€œzombieâ€ was influenced by his fascination with horror films.

â€œWhen I was a kid I was a big fan of the Teenage Mutant Ninja Turtles, and I wanted to be a ninja turtle and live in the sewers. But as I got older I fell in love with zombies and wanted to become one. Oh, and I love George A Romero's Living Dead movies.â€

Considering he spent over $4,075 Canadian on his tattoos, they weren't just a piece of self expression, but also a long term financial investment for Rick.

Far from what people may think, Rick wears his odd body decoration with conviction and pride in the beautiful, artistic expression a decomposing body represents for him.

â€œYou've got to respect that everyone's different and has to do what they've got to do. I can't tell you what to do, you can't tell me what to do â€“ but we can still get along just greatâ€ Rick says.
6.9
Score
Popularity
Activity
Freshness
Attend Future Festival

100 Deliberately Decayed Finds
From Fruit to Fashion, These Innovations are Morbid and Macabre