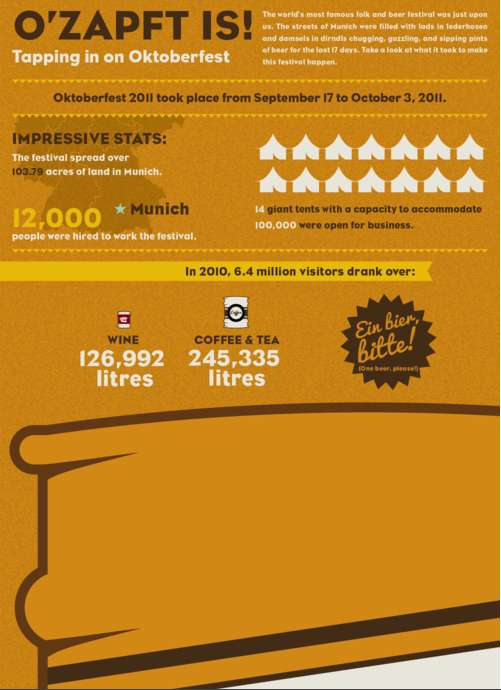 'Tapping in on Oktoberfest' Racks up the Festival's Remarkable Stats

Susan Keefe — October 6, 2011 — Lifestyle
References: holykaw.alltop
Oktoberfest recently wrapped up in Munich, and to celebrate another successful round of festivities Visible Technologies has created the Tapping in on Oktoberfest infographic using the impressive stats from last year's event. Oktoberfest is an institution in Bavaria; a festival so popular that every year countless other countries try to replicate it's atmosphere and famed debauchery with minimal success. Let's take a look at how the pros do it and find out just how much beer those thirsty Bavarians put away this past year.

Those who took part in Oktoberfest 2010 consumed an astounding 7,100,000 liters of beer, ate over 505,900 fried chickens and supped on 119,302 pork sausages. Munich used 14% of the city's daily electricity to power the festival and 27% of Munich's daily water was use through out the course of the party. The city pulled in an astounding 1.14 billion dollars from the festival in 2010 alone. Clearly, this annual get-together plays a huge role in the city's economy.

By all accounts, 2010 was a good year and if these stats are any indication this year's numbers are sure to shock. So, hold on to your lederhosen and prepare yourself for the next installment in Visible Technologies Tapping in on Oktoberfest infographics.
0.5
Score
Popularity
Activity
Freshness