3 Cups in One
Next
Set of
Related
Ideas 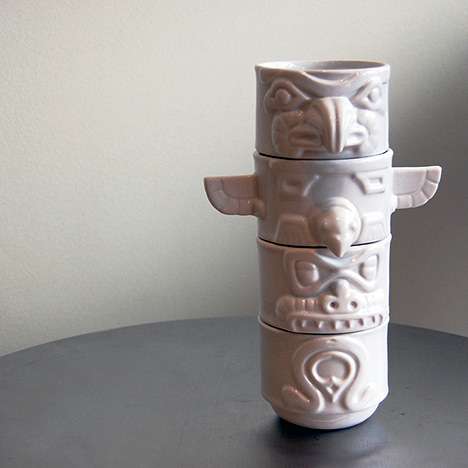 Katie Cordrey — January 25, 2009 — Art & Design
References: imm-living & mocoloco
Toronto-based designer Rob Southcott has created a collection of stacking cups that, when assembled, resemble a Pacific Coast tribal totem pole. Totem poles are large carved ‘stories’ of clans or families. Despite lore to the contrary, totems weren’t part of the First People’s religious beliefs, but they were used to commemorate and celebrate events.

Totem poles began to fade out of existence after the parties that accompanied the erection of the poles, called potlatches, were banned by the Canadian government in the late 18th and early 19th centuries. Most of the older poles still on display were carved in the 19th Century. The craft was nearly extinct but was revived in the 1960’s and 1970’s as increased cultural awareness gave a boost to the practice.

Southcott’s Totem Cups are a fitting tribute to the history of the totem and fits well with the ritual aspect since a hot cup of coffee or tea to start the morning is one of the rituals that has a good chance of surviving over time.
1.1
Score
Popularity
Activity
Freshness