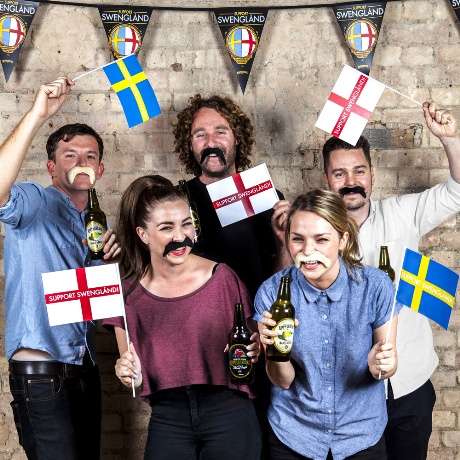 Katherinev123 — June 12, 2012 — Lifestyle
References: facebook & marketingweek
Share on Facebook Share on Twitter Share on LinkedIn Share on Pinterest
For the upcoming Euro 2012 soccer game between Sweden and England, the cider brand Kopparberg is launching a quirky 'Swengland' campaign, in which Swengland fan packages are being given away to fans living in both nations before the game. These special fan packs include fake "English moustaches" and "Swedish moustaches," along with double-sided hand flags representing each of the two countries.

The Swengland campaign, created by PR agency Margaret and run on Kopparberg's Facebook page, aims to elevate the brand's online interactions and bring fans from both Sweden and England together. According to Rob Calder, Kopparberg's head of marketing, it is trying to combine the two countries in a fun way that goes hand-in-hand with the company's 'Un-established since 1882' brand message.