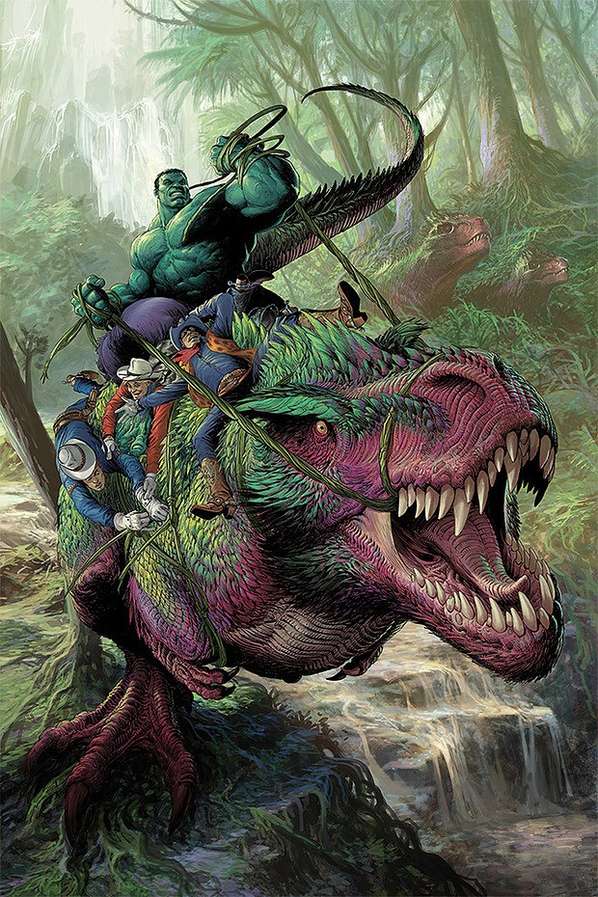 Lacey-Jane Walsh — June 20, 2013 — Pop Culture
References: nisachar.deviantart & inspirefirst
Share on Facebook Share on Twitter Share on LinkedIn Share on Pinterest
These Incredible Hulk illustrations by deviantART user Nisachar combine superheroes and dinosaurs, resulting in some seriously badass drawings. The hulk is already big and mean, but pairing him with a dinosaur while he fights bad guys is just unbeatable.

In one of these fantastic illustrations, the Hulk is riding a vicious looking T-Rex through the jungle. Strung over the back of the T-Rex, there are three cowboy hat wearing bad guys, tied up. In another epic picture the Hulk punches a bad guy (and his war horse) high up into the sky. One of these illustrations is a little more futuristic; it depicts the hulk in an Iron Man type suit, shooting off into the sky. In the background you can see dinosaurs and bad guys, as well as a city skyline.

These intense Hulk inspired art works are a lot of fun to look at. But then again of course they are, they do combine superheroes and dinosaurs, after all.
3.6
Score
Popularity
Activity
Freshness
Attend Future Festival