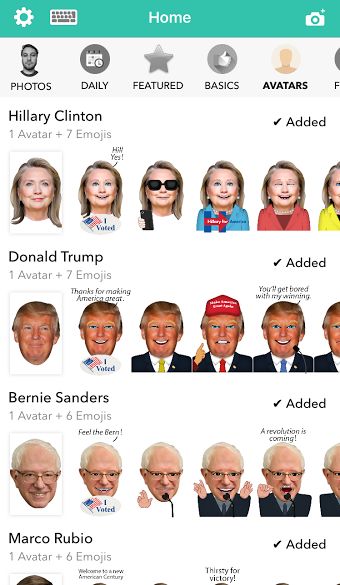 These Political Emojis are Available for Super Tuesday 2016

Katherine Pendrill — March 1, 2016 — Pop Culture
References: itunes.apple & bustle
Share on Facebook Share on Twitter Share on LinkedIn Share on Pinterest
The new presidential emojis from EmojiFace are available just in time for Super Tuesday 2016. Super Tuesday is considered one of the most important days in the American presidential election and what better way to show support for the candidate of your choice than with an adorable emoji.

To commemorate Super Tuesday 2016, EmojiFace is rolling out a series of presidential emojis. The collection includes all of the most important presidential candidates, including Bernie Sanders, Hillary Clinton, Ted Cruz, Marco Rubio and Donald Trump. Each emoji comes with six different looks, which range from adorable to downright scary. The emojis are added directly to the user's emoji keyboard, meaning it is easy to add an image of Hilary popping champagne to your next text message.
4.4
Score
Popularity
Activity
Freshness
Access Advisory Services