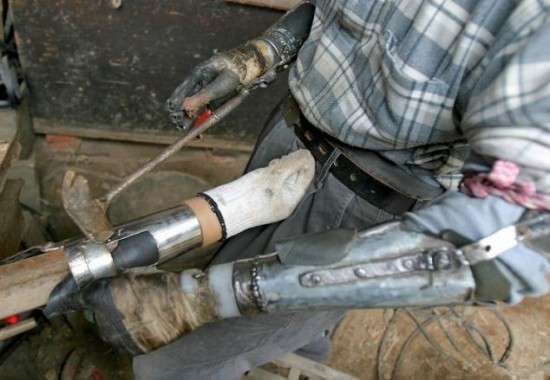 The Sun Jifa Bionic Arms are a Handy Invention

Sun Jifa is a 51-year-old man from Guanmashan, northern China, who lost both of his hands when a homemade fish-blasting bomb went off prematurely. Unable to afford the prosthetic arms the hospital could provide, Sun Jifa spent the last eight years developing prototypes before deciding on his current bionic arms made from scrap metal. The arms work using a series of wires and pulleys inside the arm shell.

“The only drawback is that steel is quite heavy so they’re tiring to wear and get hot or cold in the extremes of summer and winter,” explained Sun. He plans on developing his design for others without the use of arms. Sun mentions, “I made this from scrap metal for virtually nothing. There is no need to pay hospitals a fortune.”