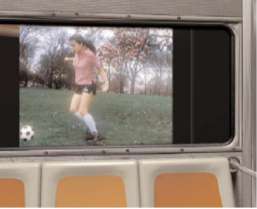 Bianca — June 12, 2007 — Marketing
References: youtube
Share on Facebook Share on Twitter Share on LinkedIn Share on Pinterest
What better place to plunk an ad than in a subway? Bored commuters pass the same scenes every day, with rarely a new site on the journey. Though there may be the odd car accident in the city or a lucky cow that breaks through a countryside fence, nothing new could possibly appear when traveling through tunnels.

Until now, that is. In Beijing, subway goers have been kept entertained by bright advertisements flickering from the walls of dark tunnels. The unexpected flash of bold colour gets the attention of most riders, putting their focus on the advertisement at hand.

Beijing's subway ads feature a simple ad with a web address in bright colours while fireworks appear to flicker in the image's black sky. The animation effect is achieved in the same way little flicker books seem to move; comprised of thousands of images next to each other, the high speed of travel tricks the eye into perceiving the images as moving.

In Tokyo, it's even more elaborate. One hair care commercial (embedded) features beautiful models posing while their long hair is blown around. Very cool!

Animated subway ads are still a very young concept, and their full potential has yet to be unlocked. Even in its earliest stages, this marketing tactic captures the attention of thousands.

YouTube users were equally enthused about the marketing tactic. User feitclub put it well, â€œNever seen these before, in New York or elsewhere. Frankly, the grimy interior of a subway tunnel is perhaps the one place I wouldn't mind ads creeping into.â€