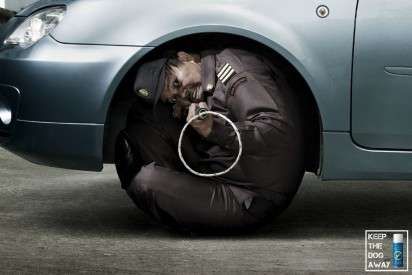 Meghan Young — June 19, 2012 — Marketing
References: ibelieveinadv
Share on Facebook Share on Twitter Share on LinkedIn Share on Pinterest
The Subtract Keep the Dog Away ad campaign may seem a little aggressive, especially since it involves people's precious pets, but it is this aggressiveness that will draw attention. A comical scenario, it portrays three angry men as car tires, wielding dangerous weapons to keep dogs and cats at bay. Of course, the campaign shows that there is an easier way to keep them away. It involves the Subtract Dog and Cat Repellent.

Created by Monday, an ad agency based in Bangkok, Thailand, the Subtract Keep the Dog Away ad campaign was art directed by Trisith Arreevong, Sarita Chanthai and Wiboon Leepakpreeda with creative direction by Passapol Limpisirisan. It is a playful, creative and clever campaign.
4.3
Score
Popularity
Activity
Freshness
Jeremy Gutsche Keynote Speaker