Stranded on a Remote Island 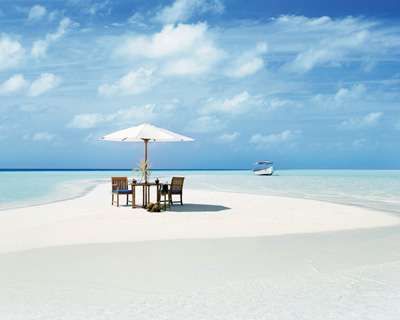 Jacob Courtade — December 11, 2006 — World
References: fourseasons
Share on Facebook Share on Twitter Share on LinkedIn Share on Pinterest
Four Seasons has opened a second hotel in the Maldives. This newest luxury retreat, Four Seasons Maldives at Landaa Giraavaru, combines the ultimate in exotic locations with the extensive plushness of a Four Seasons hotel. The spectacular location truly isolates you from the rest of the world: you need to take a plane from the capital city, MalÃ©, to the remote Baa Atoll. Once there, you have the choice of many activities (if you actually want to do something other than lie on the beach). According to Four Seasons, some of the activities range "from genuine ayurvedic healing in the spa to splashing, sailing or diving in the jewel-like Indian Ocean and Maldives' most pristine lagoon."

Need to get closer to the water? Book one of the 10 state rooms on the Four Seasons Explorer and cruise the crystal blue waters of the Maldives. For those who want to take it to the next level, book the Explorer Suite and have almost 500 square feet of pure luxury cabin space for you and your guest (including a dining area). Only Four Seasons could offer an experience like this.
2.6
Score
Popularity
Activity
Freshness
Attend Future Festival