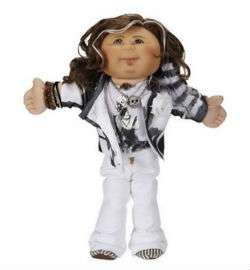 The Steven Tyler Cabbage Patch doll, which is dressed in tight white jeans, a printed tee and adorned with beaded accessories, also comes with a mic stand with Tyler’s signature scarf tied to it, says Ecorazzi.

In addition to Steven Tyler, several other celebrities have participated in recreating themselves into Cabbage Patch dolls, including Al Roker, Katherine Heigl and Raven-Symoné (yes, she of the show ‘That’s So Raven’). This initiative is a join effort between the celebrities, JAKKS Pacific and Cabbage Patch Kids to raise funds for the Children’s Action Network (CAN), which is an American adoption organization that helps foster-care children (of which there are 107,000 in the United States) find homes. Currently, the dolls are available on auction on eBay.
1.4
Score
Popularity
Activity
Freshness
Attend Future Festival