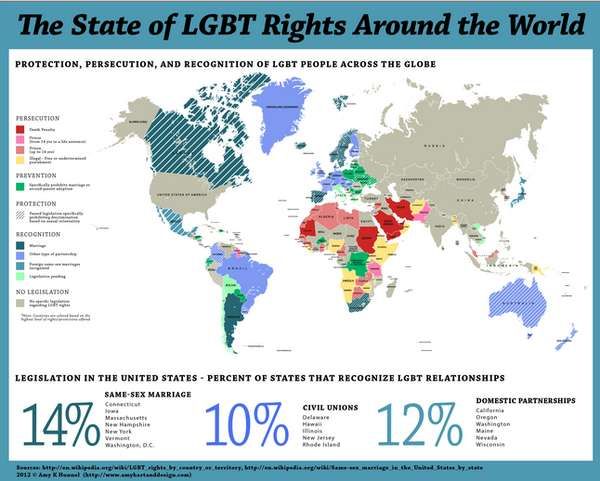 The ‘State of LGBT Rights Around the World’ Infographic is In

Jennifer Gosnell — August 24, 2012 — Lifestyle
References: visual.ly
Share on Facebook Share on Twitter Share on LinkedIn Share on Pinterest
The ‘State of LGBT Rights Around the World’ infographic is a fascinating global take on the current situation of gay rights in the modern day. From death penalty to marriage rights, there is no cookie-cutter answer for how the world has taken to accepting gay marriage globally.

In countries such as Saudi Arabia, Sudan and Iran, gay couples face the death penalty for openly being together. Whereas in Canada, Argentina, Spain and South Africa among many others, gay couples enjoy the right to marry and start a family. This relatively recent step has been incredibly progressive of some.

The in-between of these two includes (on the negative side) prison, illegality and refusal of adoption, and (on the more positive side) other types of partnerships (civil unions, acceptance of foreign same-sex marriages) and those with legislation pending. While these are not the same as full-out marriage, they are a step towards greater tolerance.