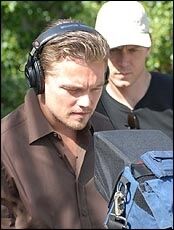 Leo's "11th Hour" Is Everything "An Inconvenient Truth" Was Missing

Bianca — August 23, 2007 — Eco
References: theedge.bostonherald
Share on Facebook Share on Twitter Share on LinkedIn Share on Pinterest
Global warming activists and lovers of the Earth were extremely excited when The 11th Hour debuted last Friday in New York and Los Angeles. The film, starring environmentally concerned movie star, Leonardo DiCaprio, was an instant box office hit. Directed by Nadia Conners and Leila Conners Petersen, the film has "everything An Inconvenient Truth was missing: solutions," according to TreeHugger.com. DiCaprio is hoping to use his celebrity status to help bring global awareness to what's happening to our planet, and hopes that the film -- which he has dedicated the last three years to producing -- will be effective in his mission.

â€œThat's the main intent: To have an audience leave this film being scared of the reality of what these people are saying, but also feel galvanized to do something about it,â€ the Boston Herald quoted DiCaprio. â€œTo feel like all of us as individuals, as a global community, are responsible and need to change the way that we do things.â€

â€œI wanted to take the position of a concerned citizen of the world. As someone who, I guess you could say, is aware of environmental issues like global warming and all of the other issues that we talk about in the movie, I could give the scientists and the experts a format in which they could speak freely and openly without having to argue the points anymore - because the consensus is there in the scientific community.â€
2.3
Score
Popularity
Activity
Freshness
Get Trend Hunter Dashboard