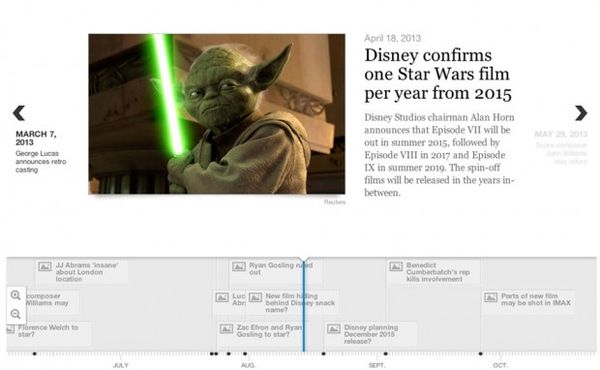 Angela Rajic — February 7, 2014 — Pop Culture
References: telegraph & mightymega
With all of the Star Wars rumors buzzing around for the upcoming new segment of the Sci-Fi saga, One UK newspaper took it upon themselves to clean up the confusing mess of what-ifs and create their own interactive timeline. The telegraph organized all of the casting, directing and music rumors about the mysterious Episode VII and put them in order of first appearance. They then took all of the neatly organized information and created a clickable timeline so viewers could view each article in chronological order.

This Star Wars rumors timeline lets fans keep track of all information dribbling out about the new films and not lose track of what has been confirmed, denied and debunked. This Star Wars rumors timeline is also a great way to keep track of the film's development in general, and will keep fans excited for more information.
0.9
Score
Popularity
Activity
Freshness