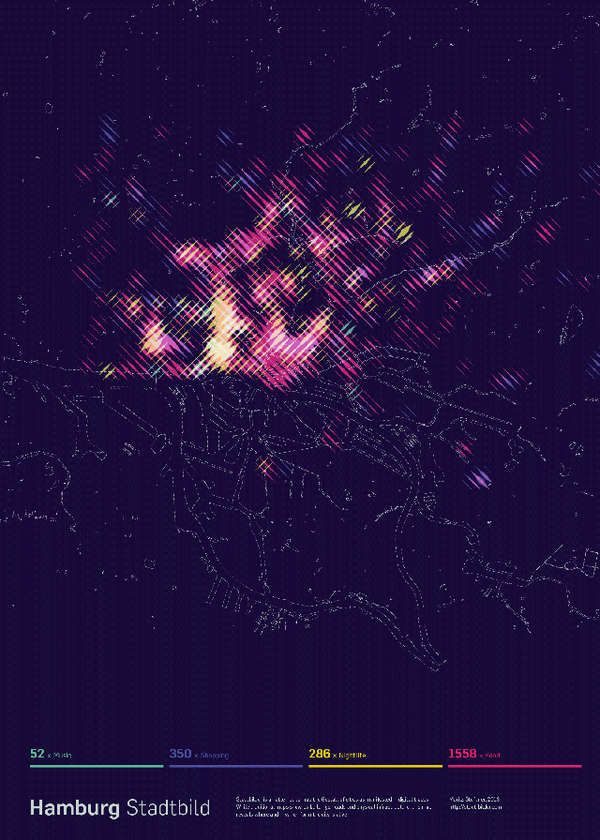 Alexander Lam — May 30, 2013 — Lifestyle
References: stadt-bilder & thecreatorsproject.vice
Share on Facebook Share on Twitter Share on LinkedIn Share on Pinterest
A city is truly the sum of its people, and Moritz Stefaner decided to show that with his 'Stadtbilder' maps. Instead of mapping physical infrastructure, Stefaner's map draws out a city's citizen's digital activity. The map uses "digital traces" of people in cities to map out where people have been. Using location data from services like Foursquare, Stefaner mapped out where the cultural hotspots are.

The map filters activity based on four categories. Music, shopping, nightlife and food are used to sort out the geo-location data. Stefaner chose these because they represent a city's culture and activity. Stadtbilder maps out three major German cities with these categories. Berlin, Hamburg, and Munich were chosen by Stefaner for the initial prints. These large cities have an abundance of data which made the maps look like an explosion of fireworks.
0.5
Score
Popularity
Activity
Freshness
Jeremy Gutsche Keynote Speaker