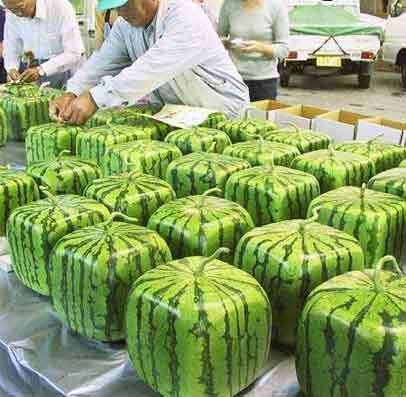 Watermelons That Make It Look Hip To Be Square

“The reason they’re doing this in Japan is because of lack of space,” said Samantha Winters of the National Watermelon Promotion Board in Orlando, Florida.

A fat, round watermelon can take up a lot of room in a refrigerator, and the usually round fruit often sits awkwardly on refrigerator shelves. (CNN)

From BBC, “Fashion food”
To make it happen, farmers grew the melons in glass boxes and the fruit then naturally assumed the same shape. Today the cuboid watermelons are hand-picked and shipped all over Japan.

But the fruit, on sale in a selection of department stores and upmarket supermarkets, appeals mainly to the wealthy and fashion-conscious of Tokyo and Osaka, Japan’s two major cities.

Each melon sells for 10,000 yen, equivalent to about $83. It is almost double, or even triple, that of a normal watermelon.
6.6
Score
Popularity
Activity
Freshness
View Innovation Webinars