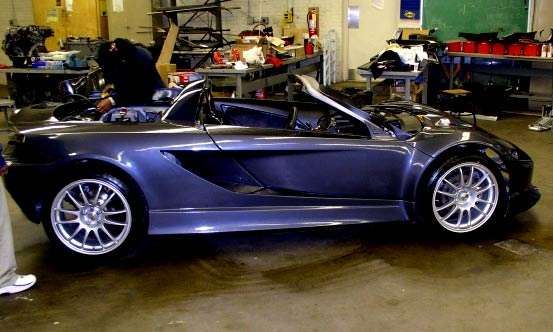 "The top auto designers in Detroit have been slam-dunked by a group of high school kids from Philadelphia who built the K-1 Attack Hybrid, a sports car that gets 50 miles per gallon and can go from zero to 60 in four seconds. During auto shop class, the group took a Honda Accord chassis, a Volkswagen turbo diesel engine and a 200hp electric motor, and put together a hybrid electric/biomass car that runs on soybeans. Now the car has won a race and is getting big-time press coverage all over the U.S." (Gizmodo)

From Philly.com:
The car - designed and built by students in the school's Academy for Automotive and Mechanical Engineering - delivers more horsepower than some Porsches and gets gas mileage comparable to a Toyota Prius. It runs on fuel made from soybeans.
Last year, the car was the surprise winner of a competition for eco-friendly vehicles, the Tour de Sol. The students, hoping to prove their success was no fluke, will enter the car again this year.
They'll be back despite an effort by school district budget-cutters last year to eliminate the program. It was saved by an outcry from parents and area auto dealers, who see the program as a source of hard-to-find trained mechanics.