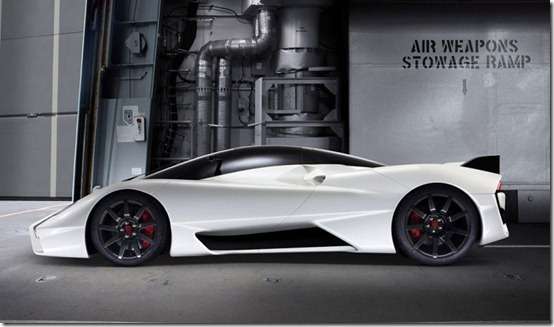 Patrick Walsh — November 11, 2011 — Autos
References: hotcarszone & hotcarszone
Share on Facebook Share on Twitter Share on LinkedIn Share on Pinterest
The SSC Tuatara is a sports car named after a reptile from New Zealand and out to take top spot for sports cars. The Tuatara is a fascinating creature as it possesses the world’s fastest evolving DNA. A very fitting name as SSC is arguably one of the world fastest growing car manufacturer’s.

With the Tuatara’s dual overhead camshaft and 7.0 liter twin-turbo V8, which will redline at an estimated 9,000 rpm, it is expected to deliver close to 1,350hp. The Tuatara weighs a mere 1,200kg (2750lbs) which is its dry weight due to the carbon fiber construction. Even the wheels have been manufactured from carbon fiber and further weight has been saved by using aluminum crumple zones. As a result of all the figures above the Tuatara will have a power to weight ratio of 1,125 hp per ton.

It is estimated that the Tuatara will be able to achieve 0-62 mph in a mere 2.5 seconds and reach a top speed of 276 miles per hour. If it achieves the proposed top speed then it will take the title of world’s fastest production car. It must beat the record set by the ‘Buggatti Veyron’ Super Sport at 267 mph. Once released it will cost an estimated $970,000 (£630,000, €730,000)
5.6
Score
Popularity
Activity
Freshness
Jeremy Gutsche Keynote Speaker