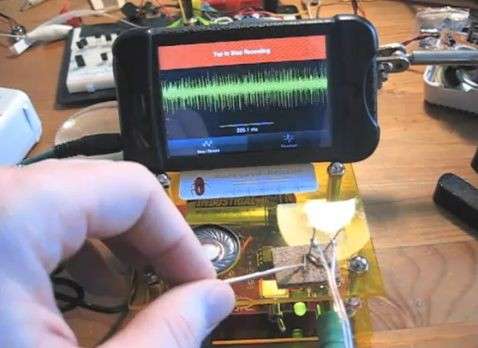 The 'SpikerBox' Neuron Reader Inspects the Minds of Insects

Sarah Moore — March 23, 2012 — Unique
References: backyardbrains & gizmag
Timothy Marzullo and Gregory Gage are the masterminds behind the bizarre 'SpikerBox' neuron reader, which lets you read the brainwaves of creepy crawlers. The only catch to learning about the inner brain patterns of a bunch of bug-eyed insects? You have to remove one of the icky creatures legs to get a reading.

The weird, but extremely inventive device is made up of a speaker, metal-needled neuron probes and a microprocessor and is powered by a 9-volt battery. To operate the device, the user must remove an appendage of their insect of choice and place the two neuron probes into it. One probe works to ground the device and the other records brain patterns. Since the part of the insect is still alive, the wannabe scientist can hear the neurons pulsing through the insect's leg and can do various experiments to see how the activity changes under certain conditions.

The SpikerBox neuron reader can also be hooked up to an iOS or Android device to bring the data on the go.
1.6
Score
Popularity
Activity
Freshness