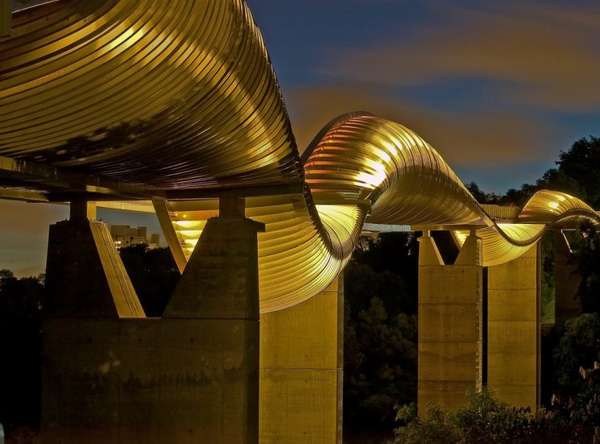 Here are some tidbits of information on each, in the order they appear;

‘Henderson Waves' is Singapore’s highest pedestrian bridge. The bridge’s deck is made from thousands of balau wood slats. Each of the upwardly curved sections creates sheltered seating areas.

The privately owned footbridge in Lake Austin was built by Miro Rivera Architects. The bridge connects their client’s main house to the guest house. The delicate looking bridge is actually made from welded steel and local stone.

Innovation is key in the design of the award winning Rolling Bridge in London England. Designed by Thomas Heatherwick, the bridge rolls up and down over a canal with the help of hydraulics.

The three criss-crossing arches of the 1.2 km JK Bridge in Brasilia are both elegant and modern. It is a piece of organic art in the river.

This massive vertical lift bridge in Rouen, France, can lift 180 ft vertically in just 12 minutes, allowing cruise ships to travel through. Each of the bridge’s vertical spans weight an astonishing 1200 tons.

This is the third incarnation of the Kintai Bridge over the Nishiki River. The first built in 1673 was damaged by flooding and the second was destroyed in a 1950 typhoon. Only clamps and wires hold together the 5 arches of the Kintai bridge.

The Beipanjiang River Bridge is a railway bridge in Guizhou built as part of the ‘Guizhou-Shuibai Railway Project.’ The bridge connects two mountains, with its highest point 918 ft above ground.

Papua New Guinea is the home to what technically is a bridge; however only gas and oil lines are allowed to cross its 1290 ft high span. If it was officially recognized as a bridge, it would go on record as the ‘world’s highest bridge-span.’
3.3
Score
Popularity
Activity
Freshness
View Innovation Webinars