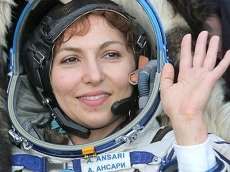 Trend Spotter — September 30, 2006 — Tech
References: spaceblog.xprize.org
Share on Facebook Share on Twitter Share on LinkedIn Share on Pinterest
Anousheh Ansari, sponsor of the X-Prize, has made her commercial voyage into space. In addition to being the first female space tourist, she created the first commercial Space Blog by documenting her adventures. In her Space Blog, describes her insights and reflects upon everything from velcro to the hazards of zero gravity.

For background, Anousheh Ansari is a successful entrepreneur who serves as chairman for Prodea Systems. She dreamed of space exploration since childhood and her family became the sponor of the Ansari X Prize, a $10 million cash award for the "first non-governmental organization to launch a reusable manned spacecraft into space twice within two weeks".

In 2004, the prize was attained by aerospace designer Burt Rutan. Rutan's designs then went on to achieve sponsorship from Richard Branson's Virgin Galactic.