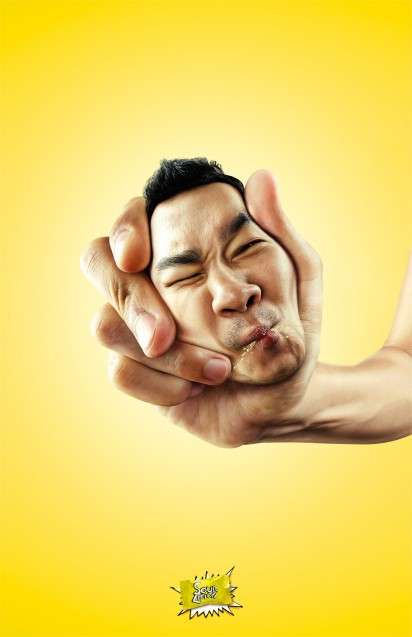 Meghan Young — November 25, 2012 — Marketing
References: bangkokshowcase & ibelieveinadv
Share on Facebook Share on Twitter Share on LinkedIn Share on Pinterest
The Sour Lemon Candy campaign shows that this candied treat is so sour, it will feel like someone has popped off one's head and is squeezing it tightly in their hand. This feeling is hilarious visualized in the print ads to great effect. Although clearly doctored, the images are imaginative enough to reel in all fans of this candy, from children to grandparents and everyone in between.

Conceived and executed by Bangkok Showcase, an ad agency based in Bangkok, Thailand, the Sour Lemon Candy campaign was art directed by Sakon Khanawuthikarn with creative direction by Chokchai Tupanyakanok. Set on a bright yellow backdrop, which clearly mimics the hue of the candy itself, the heads and hands were photographed by Srimongkol Phachonkaew, expertly manipulated by Pattarasak Sitthisroung and retouched by Tochapon Thananatrajdee.
3.2
Score
Popularity
Activity
Freshness
View Innovation Webinars