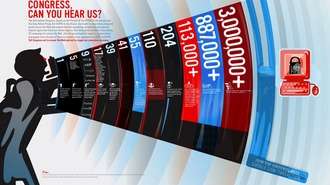 This SOPA Infographic Supports Those Against the Bill

Josh Mears — January 21, 2012 — Pop Culture
References: static.googleusercontent & dvice
Share on Facebook Share on Twitter Share on LinkedIn Share on Pinterest
SOPA is a huge deal to many online establishments, and this SOPA infographic was constructed to visualize the outrage many have over the bill in question. SOPA is the short form for the Stop Online Piracy Act, which in itself seems far from extreme. However, the results could have a huge impact for many businesses, as it enables producers of copyrighted material to eliminate sites that rebroadcast, or appear to rebroadcast their information without a court appearance and only five days notice.

This SOPA infographic shows the amount of outrage and its origins against the bill among the online community. This SOPA inforgraphic tackles the issue over the bill without getting nasty, or trying to manipulate its viewers. According to the SOPA infographic, over three million Americans have publicly complained to the congress. In addition to the infographic, which segments different issues various groups have, several sites were blacked out on January 18th, 2012 in protest.
2.5
Score
Popularity
Activity
Freshness
Get the 2021 Trend Report FREE