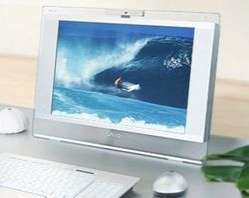 Going Like Sixty — July 8, 2007 — Tech
References: sony
Share on Facebook Share on Twitter Share on LinkedIn Share on Pinterest
Sony, outside of Apple, makes some of the most eye-catching gadgets. They will soon be releasing a VAIO with a transparent chassis. It has the works, Intel Core 2 Duo processor, Blu-ray, 750GB hard drive and Vista. A webcam is included, tweaking Apple who claims that Windows PC's don't have webcams built in.

Implications - The battle between PCs and Apple Macs stems from Apple's ability to embrace things that, at first, seem like novelties that aren't necessary to function and thus, are not necessary to consumer satisfaction. PC has quickly learned by Apple's example, paying more attention to the less technological side of consumer demands in terms of gadgets.
1.6
Score
Popularity
Activity
Freshness
Access Advisory Services