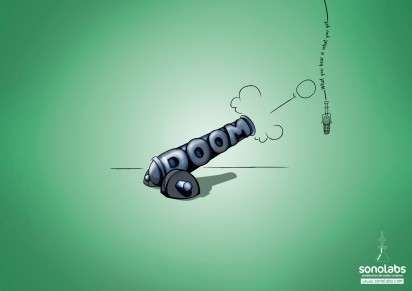 Meghan Young — March 9, 2012 — Marketing
References: ogilvy & ibelieveinadv
Share on Facebook Share on Twitter Share on LinkedIn Share on Pinterest
The Sonolabs campaign promotes the company's outstanding creative audio production. It does so by focusing on common sounds such as a canon's boom and a cow's moo. These sounds are visualized through typographical applications. For instance, 'boom' is written across the canon's body. Dangling from the ceiling of each print ad is a microphone, the cord of which forms the sentence, "What you hear is what you get." The Sonolabs campaign essentially shows that they are able to create any sound that a person can hear.

Conceived and executed by Excell Ogilvy, an ad agency based in Honduras, the Sonolabs campaign is clever and succinct. The entire focus lies on the illustrations. It was art directed and illustrated by David Rodríguez with copy by Oliver Rodríguez.
1.6
Score
Popularity
Activity
Freshness
Get Better and Faster