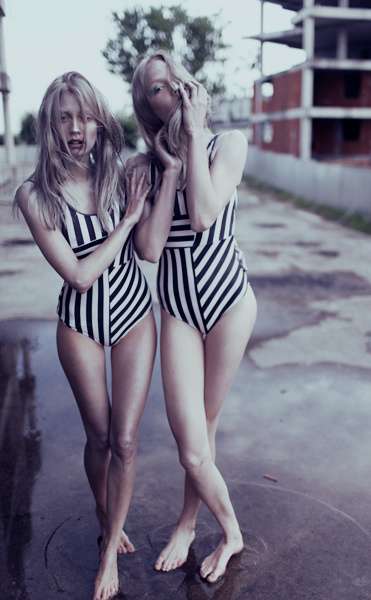 This Sonia Szostak Series Will Leave You Seeing Double

Josh Triantafilou — March 29, 2012 — Fashion
References: soniaszostak.4ormat & vectroave
Share on Facebook Share on Twitter Share on LinkedIn Share on Pinterest
Polish photographer Sonia Szostak has shot a series of photos that focus on two young women who are also identical twins. In the first few shots of the series, they are wearing matching zebra-striped bathing suits. This produces a whirling, almost psychedelic effect.

These models deserve credit, as they pose in such a way as to compliment one another. Usually, models are the center of attention; however, in this Sonia Szostak series it is hard to concentrate on either one. Indeed, the framing of the shots encourage the viewer to look at each photograph holistically rather than view the scene's collection of disparate details.

Sonia Szostak demonstrates a talent that many fashion photographers would be envious of. From the choice of outfits to composition to lighting, her work is spot-on.