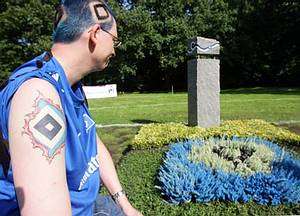 Hayley Grieve — September 11, 2008 — Lifestyle
References: hsv.de & thestar.my
Hamburg SV's lifetime devoted football fans never have to worry about missing a single game--even in the afterlife. The club has just opened a fan cemetery just next to the stadium that can hold around 500 graves.

For many local Hamburg men, the excitement of the team season and the loud cheering crowds has become a major part of their lives over the decades. They take comfort in the fact that that they will always be a part of the club, even after they die. One spokesman for the team said the club received many requests from people hoping their ashes could be spread under the goal post, or mixed into the field. Since they could not say yes, the idea of a sacred cemetery arose.

Although they claim to be the first soccer club cemetery in Europe, they are second in the world to the Boca Juniors Club Cemetery in Argentina. Earlier this year, Trendhunter told you about a Chicago Cubs cemetery in Illinois for die-hard (no pun intended) baseball fans. I hope their wives don't mind.
2.4
Score
Popularity
Activity
Freshness

21 Creative Burials
From Green Graveyards to Punk Rock Funerals, Go Out With One Last Bang