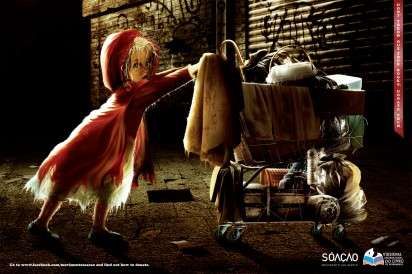 Meghan Young — March 14, 2012 — Business
References: pazbr & ibelieveinadv
Share on Facebook Share on Twitter Share on LinkedIn Share on Pinterest
Instead of throwing old books to the curb, the So Acao Solidarity Movement ad campaign encourages people to donate them so that they can provide literary companionship to others. By giving them an opportunity to find a new home, the beautiful characters in fairy tales and fiction can impart their wisdom to others.

Conceived and executed by Paz Comunicacao Estrategica, an ad agency based in Sao Paulo, Brazil, the So Acao Solidarity Movement ad campaign depicts the sad state these discarded books could potentially suffer through the imagined homelessness of Little Red Riding Hood, Pinocchio and the Three Little Pigs.

Working in conjuction with the Bienal Internacional do Livro de Pernambuco, the So Acao Solidarity Movement ad campaign even suggests where these books can be donated.
4.3
Score
Popularity
Activity
Freshness
View Innovation Webinars