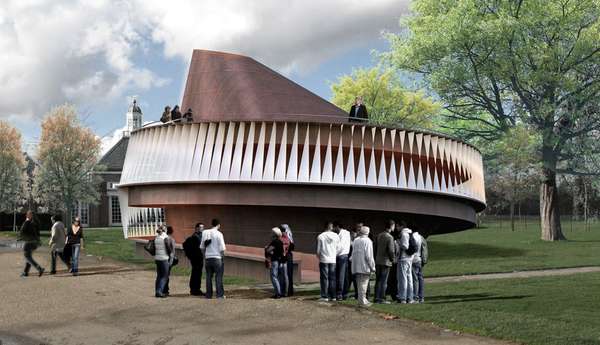 The Icelandic artist Olafur Eliasson, known for being the artist who decked Tate Modern's entrance hall with a blazing sun in 2003, revealed his plans to create the pavilion as a giant snail shaped building in London's Hyde Park.

The pavilion which Eliasson drew up with Norwegian architect Kjetil Thorsen, known for designing the new Bibliotheca Alexandrina, is a timber-sheathed structure resembling a spinning top. Visitors will be able to go up two levels on a spiraling ramp and peer down at a central arena in the pavilion.

This gallery shows some of the winning Serpentine Gallery Pavilions from past years.
1.5
Score
Popularity
Activity
Freshness
View Innovation Webinars