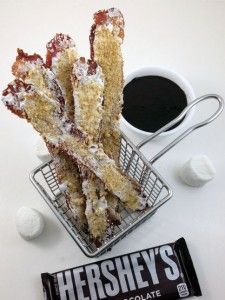 Alyson Wyers — October 6, 2014 — Lifestyle
References: dudefoods
This find from DudeFoods brings together two of humanity's favorite foods in one epic snack: s'mores bacon. After creating s'mores chicken wings, DudeFoods contributor Nick Chipman did the same thing but with bacon as the base.

After frying some bacon, Chipman covered the strips in melted marshmallows. This let the crumbled graham crackers stick to the bacon. After reheating them to get the s'mores bacon nice and gooey, they can then be dipped into melted chocolate from a Hershey's milk chocolate bar.

This is an epic snack, especially during the fall season. While it is certainly not the healthiest option, the combined textures will likely be amazing, as will the mix of sweet and savory flavors.
0.8
Score
Popularity
Activity
Freshness