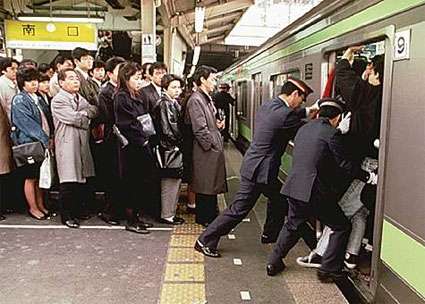 Cowbag — March 28, 2008 — Unique
References: news.bbc
Hot on the tail of their Minister of Animation, "etiquette police" are set to enforce manners on a Japanese metros where the bulk of bad etiquette can be seen.

People travelling on Yokohama's, a port city south of Tokyo, metro transport will soon be told to behave properly in public. Behaving properly including turning down their headphones and giving up their seats for their elders and betters.

Randomly called the Smile-Manner Squadron, the team is mostly made up of over-60s with younger body guards (I love this detail).

I think it is a GREAT idea - but not a chance in hell of it working in London. They would not know where to start.


Meanwhile in China, they're busy training girls etiquette for the Olympics...