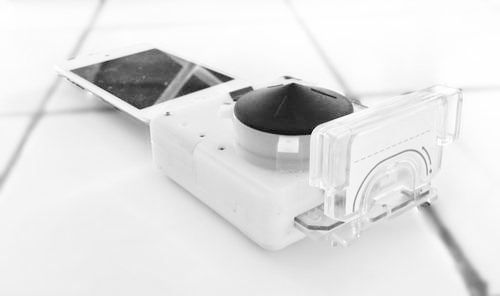 Ramy — February 18, 2015 — Tech
References: wired & buzzfeed
Share on Facebook Share on Twitter Share on LinkedIn Share on Pinterest
Researchers at Columbia University have built a smartphone accessory known as 'Dongle' that detects HIV in 15 minutes. The device competes with other expensive medical HIV diagnostic tools that are already out today, delivering accurate results in a span of just 15 minutes, with just a single prick of the finger. The smartphone accessory has already been successfully tested for two weeks in Kigali, Rwanda by 96 patients.

At a low cost of just $34 to make, this device can be the answer to decrease the spread of HIV in Africa and other developing countries. It uses smartphone technology platform to cut costs on a higher level. Early detection allows the spread of HIV to be reduced, so a 15 minute result on a smartphone is astonishing.

According to the Centers for Disease Control, women who detect HIV early, and who along with medical recommendation, take antiretroviral medication, can reduce the risk of transmitting HIV to their offspring to less than 1 percent.

Only time will tell, when the Dongle will be available. Dongle is compatible with Android, iPhone, iPod touch, and any smartphone that is able to run apps. The device still awaits World Health Organization regulatory approval, with the hope it will be accessible to those areas around the world that need it most.
3
Score
Popularity
Activity
Freshness
View Innovation Webinars