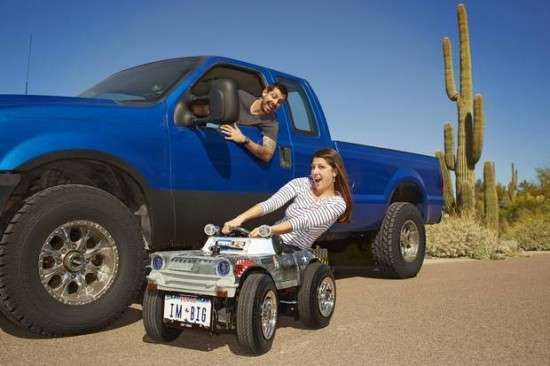 Thomas Wade-West — September 14, 2013 — Autos
References: otrecocerto & odditycentral
Share on Facebook Share on Twitter Share on LinkedIn Share on Pinterest
Austin Coulson is a 29-year-old car-builder and enthusiast who has successfully built the world’s smallest legal vehicle. Coulson notes that he has was motivated by his life-long dream of entering the Guiness Book of Records and decided to venture into the world of miniature vehicles in doing that.

The vehicle itself is taken from a 1957 Chevy Bel Air, which was custom cut for the size of the vehicle. The engine, transmission were built entirely from scratch, then additional necessities like a windshield, headlights, taillights, turn signals, mirrors, seat belt and functional horn were customized to fulfill legalities. The car measures 63.5 cm (25 in) tall, 65.41 cm (25.8 in) wide and 126.47 cm (50 in) long and reaches a speed of up to 33 mph (53 kph). The vehicle is entirely street-legal, but with some exceptions; it can only ride on certain roads, particularly due to its speed and lack of suspension.

While certainly unique, I imagine most people may be apprehensive of using this as a regular commuter to work. It does give off a cool Mario Kart-esque vibe though, which totally balances out the whole fear thing.
3.1
Score
Popularity
Activity
Freshness
Jeremy Gutsche Keynote Speaker