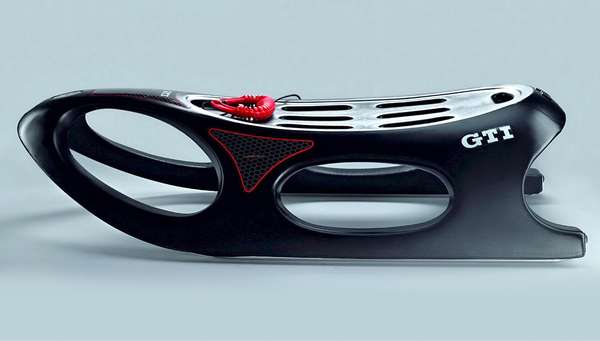 Zoom Down the Hills in Style with Crazy Bob

Over the past years, the company has introduced sleek and streamlined sleds based off previous car models, including the Golf GTI and Beetle Herbie cars. One of its sleds even has padded seating, a steering wheel and cold-resistant plastic accompanied by the Volkswagen logo on the front and makeshift speedometer gauges.

This year, Volkswagen has added 'Crazy Bob' to its lineup. Crazy Bob, a sleek, black sled with a clean and appealing design, will have you crowned King of the Hill after you zoom past your next tobogganing challenge. Modeled from Volkswagen's Golf GTI, the sled is made from a heavy plastic instead of carbon fiber, and features footrests on the sides. Their other sled for 2012 is a traditional wooden sled that can be folded, which is designed to take up less storage space.
1.7
Score
Popularity
Activity
Freshness
Get Trend Hunter Dashboard