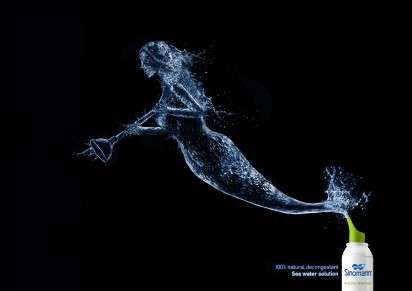 The Sinomarin Campaign Illustrates its Legendary Use of Sea Water

Meghan Young — December 16, 2011 — Marketing
References: sinomarin.net & ibelieveinadv
Share on Facebook Share on Twitter Share on LinkedIn Share on Pinterest
People will need remedies of legendary proportions for the cold and flu season, and the Sinomarin campaign provides one such cure (for the nose, at least). As a “100% natural decongestant," which is stated right in its tagline, it uses sea water to clear out the nasal passages. To illustrate how effective it really is, the Sinomarin campaign enlists the help of the mythical mermaid as well as Poseidon.

Conceived and executed by Bold Ogilvy, an ad agency based in Athens, Greece, the Sinomarin campaign was art directed by Dimitris Peponis and illustrated by Pantelis Zervos and Dimitris Peponis. Creative, clever and to the point, the Sinomarin campaign relies on stories that are currently captivating the modern age once again.
1.5
Score
Popularity
Activity
Freshness
Jeremy Gutsche Keynote Speaker