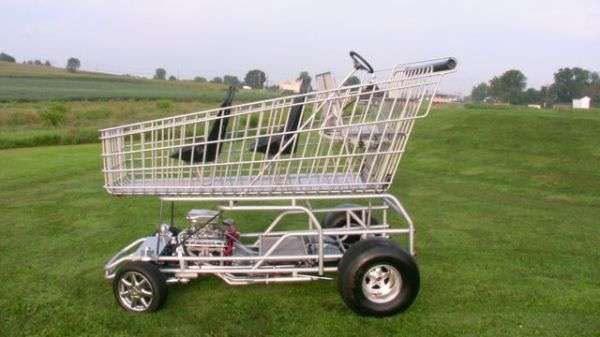 The Shopper Chopper is Powered by a V8 Engine

Meghan Young — September 26, 2012 — Art & Design
References: shopperchopper & neatorama
Share on Facebook Share on Twitter Share on LinkedIn Share on Pinterest
The Shopper Chopper is a grocery shopper's dream ride. Well, that might be a bit of a stretch, but it will certainly make grocery runs much more fun. That is, if the Shopper Chopper is ever commercialized. As it is, it can be rented for special events, becoming one of the highlights of the show.

Essentially, the Shopper Chopper is a motorized shopping cart that can seat six. What started out as a local parade project has turned into a do-it-yourself hot wheels endeavor that resulted in the Shopper Chopper being outfitted with a Small Block Chevy 350 engine. Oh, and it also glows in the dark.

A custom ride if there ever was one, the Shopper Chopper "draws attention and brings a smile to everyone who sees it," as written on its site.
3.5
Score
Popularity
Activity
Freshness
Jeremy Gutsche Keynote Speaker