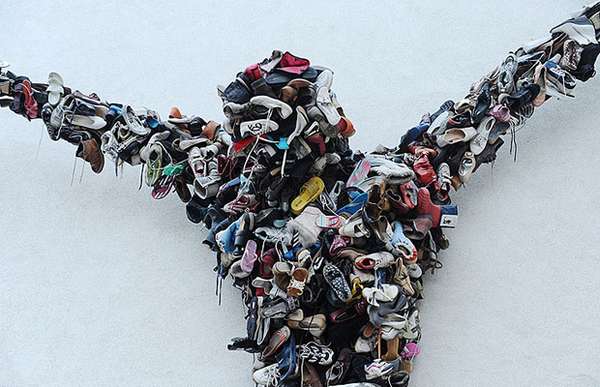 The Shoe Christ by Petr Motycka is Not Sacred

Ana Lopez — December 6, 2011 — Art & Design
References: doxprague.org & complex
Share on Facebook Share on Twitter Share on LinkedIn Share on Pinterest
When an artist decides to use religion for the sake of art, things might end up a bit bizarre, like the sculpture titled Shoe Christ by Petr Motycka. The Czechoslovakian artist created this piece to explore the theme of crucifixion and the concept of 'used' objects. Motycka's fascination with shoes and what they signify was artistically represented in a polemic and interesting installation.

This larger-than-life religious creation measures 6-meters high and weighs over 500 kilograms. In order to be constructed, the piece called for 1444 used shoes, and the result is impressive and mid-blowing.

The mind idea behind Shoe Christ by Petr Motycka was to question the concept of "used," which is why the sculpture is actually called Shoe Christ (Compulsion to Refuse Something that Has Been Used). This piece was exhibited at DOX Centre for Contemporary Art where it is exhibited from January 29, 2011.
4.7
Score
Popularity
Activity
Freshness
Get the 2021 Trend Report FREE