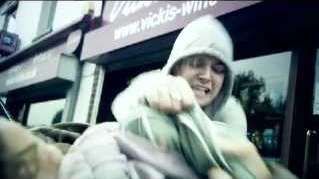 The 'Break the Cycle' ad depicts a teen girl in the following order: trying to rob a woman for money, in jail, being smacked in the back of head by her father, who simultaneously calls her a cow; at school and unable to read, then outside in the process of overdosing after taking an intravenous drug.

Those depictions alone are definitely heart-breaking.  The shock value enters in when the clips run repeatedly together numerous times until only a scream, a cry, a smack, a frustrated face, and the result of a drug overdose were seen and heard.

Finally, the following words are shown: "For thousands of children in the UK, the story will keep repeating itself until someone stops it."

It's a very powerful message that will hopefully sink into the minds of those who abuse drugs, or know someone who does. Although, I'd venture to say that child abuse awareness is included as well and may be why the young lady chose to go such a horrible route.
3.8
Score
Popularity
Activity
Freshness
View Innovation Webinars