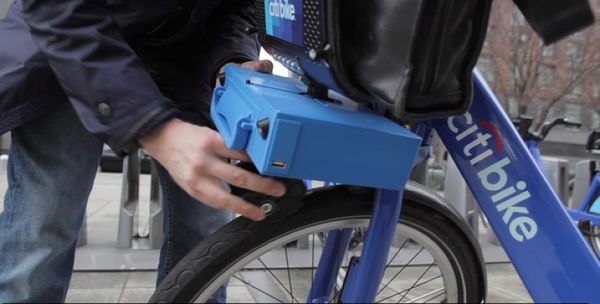 Meghan Young — February 26, 2014 — Art & Design
References: fastcoexist
Share on Facebook Share on Twitter Share on LinkedIn Share on Pinterest
As helpful as urban bicycle share systems are, it is easy to get caught up in how big and clunky the bikes themselves are; ShareRoller by Jeff Guida is essentially a portable motor that will boost the speed of these bikes. Shaped like a small compact briefcase, it essentially turns them into electric bikes. But they aren't cheap.

ShareRoller by Jeff Guida rings in at $995, and that's with a campaign discount. A person might as well invest in their own bicycle. Of course, the system can easily be applied to personal bikes, turning them into more efficient modes of transportation. Fast Co Exist writes, "The 18 mph top-speed, which falls within federal regulations, is set so the slowest riders can catch the fastest." It works with 11 major sharing systems.
6
Score
Popularity
Activity
Freshness
View Innovation Webinars