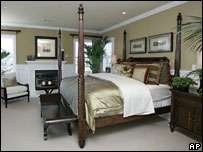 Implications - According to Stephanie Coontz, a families expert, there are couples out there, particularly in the US, that are â€œconfident enough that they have a nice marriage, but they donâ€™t particularly like sleeping in the same room.â€ She goes on to comment on how there is probably nothing wrong with their sex lives. In order for the couples to avoid feeling embarrassed about their separate sleeping quarters, builders have taken to calling the second master bedroom suites as "flex suites."
5.2
Score
Popularity
Activity
Freshness
Attend Future Festival