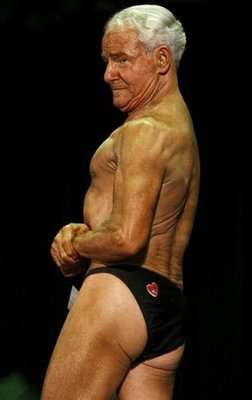 Moon was crowned champion in the “Over 60s” category at the amateur Victorian Bodybuilding Championships in Melbourne, Australia, September 14, 2008.

According to the Reuters story, Ray Moon has overcome several health related issues; polio, open heart surgery, and prostrate troubles.  They also report that Moon is on a high protein diet and trains five-days a week.

Ray Moon is in a lot better shape than not only men his age (including my grandfather), but those four decades younger.  I find him to be an inspiration to others, myself included. He apparently also has a good sense of humor: note the heart on the back of his bottoms.
6
Score
Popularity
Activity
Freshness
Attend Future Festival