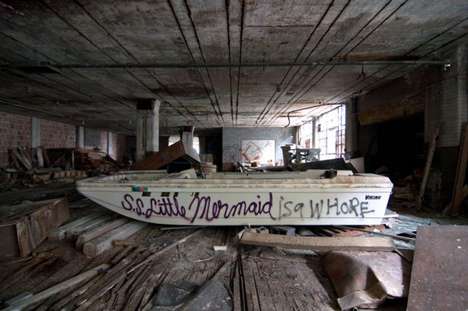 Scott Hocking himself is a Detroit native and it seems as though his photography series on bad graffiti has less to do with mocking the denizens of Detroit and more to do with documenting the derelict and depressing appearance of graffiti on buildings that have been tarnished by urban decay and abandonment.

Some highlights from this series include the poorly scrawled (and spelled) “Do Not ### In Here” warning next to a broken fence, “S.S. Little Mermaid…is a #####” on a deserted boat, and the real star of the collection, the simple and succinct: “Close my ass.”

At 36, Scott Hocking has already carved out an extremely successful career for himself from his home base of Detroit. His work has been featured in exhibitions across the globe, including Milan, France, Toronto, Canada and Australia.

Up next for Scott Hocking: An exhibition of his work at the Media Nox Gallery in Maribor, Slovenia and ‘La Fin Du Monde’ at the Susanne Hillberry gallery in Ferndale, Michigan.

Implications - In the last few years, graffiti has moved from shunned subculture to vaunted new mainstream movement in the art world. A company can capitalize on this by commissioning a respected street artist to collaborate with on a project, which increases the brand's chances of creating memorable viral marketing, as well as establishes them as a supporter of emerging artistic movements.
6.2
Score
Popularity
Activity
Freshness
Get the 2021 Trend Report FREE