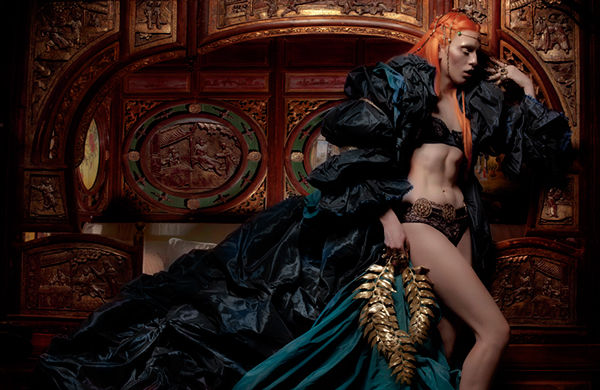 Meghan Young — July 3, 2014 — Fashion
References: schonmagazine & behance.net
Inspired by a Greek myth, the Schon Magazine 'Persephone' editorial depicts the daughter of Zeus and the harvest goddess Demeter as she was always intended. Utterly stunning in intricate and intriguingly revealing outfits, it is understandable why she was abducted by Hades to be his queen in the Underworld.

Described as a formidable, venerable majestic queen by the epic poet Homer, model Didi Maquiaveli channels her perfectly in the Schon Magazine 'Persephone' editorial. Shot by photographer Alvaro Villarrubia in an equally ornate setting, the redheaded beauty was expertly outfitted by stylist Mario Ville. From elaborate headdresses and billowing gowns to chain mail and diaphanous lingerie, he spared no expense when it came to this photoshoot. The costumed looks were perfected with theatrical hair and makeup by beauty artist Rocio Cuenca.
6.1
Score
Popularity
Activity
Freshness